Scarlet is one of the main six horses and belongs to Sarah. She is voiced by Andrea Ware.

Scarlet is a female, black Shagya Arabian mare. She has a long, midnight black mane with three, scarlet-red highlights and blue eyes. Her legs are long and graceful, and on her front right leg, she has a thick lightning bolt shaped scar on her knee, that she got from a rattlesnake. Her hooves are a dark, shiny black. Her tail is very long and slightly hiked up, and is the same shade of black as her mane, with two red highlights.

Her riding gear consists of a red bridle with a red crown symbol on it, which represents loyalty. She has a red under-blanket, and a white saddle pad. Her saddle and girth are red as well, and her stirrups are a dull gold.

In some episodes, Scarlet is seen to have a saddle bag attached to her saddle. It is a dark red with pinkish -red straps and gold colored buckles. In the episode "Talk, Talk," it is shown that Scarlet has a red blanket that her rider, Sarah, puts on her when it is cold.

Scarlet is a kind, level headed and determined horse, much like Sarah. She is patient, loving, and is great with kids.She is often the only voice of reason among the horses -alongside Shep - and tries to reason with them when they are feeling jealous, angry, or upset. She tries to make everybody happy, but in doing so, she can forget her own happiness and be somewhat moody.

Scarlet loves making new friends and is kind to everyone she meets. When a new horse comes to Horseland, either for a visit or a permanent stay, she tries to make them feel welcome and comfortable and defends them from Pepper and Chili's snide remarks.

Scarlet tries to get along with everybody, although she has a low tolerance for rude comments, which makes it hard for her to get along with Chili, Pepper, or Angora; but she also doesn't stand for rudeness to them either. In the episode "Added Weight", she stood up for Pepper.

Another point to Scarlet's personality is her cleverness; she is the only horse in Horseland that can open her stall, which she demonstrates in the episode "Oh, Baby." She learns things very quickly, especially if her rider Sarah is helping her out. Scarlet works very hard to achieve her goals, and loves to train and ride with Sarah and has a great relationship with her.

Scarlet is also sensible and brave when facing with danger, as seen in the episodes "Fire, Fire Burning Bright", "You Can't Judge a Girl by her Limo", and "The Can-Do Kid". However, she is terrified of the vet, and tries to avoid going to one at all costs, and is very secretive about her pain or unhappiness, as seen in "Back in the Saddle Again". Another flaw is that she gets jealous if Sarah rides another horse and believes that Sarah riding another horse would be unfair to her and make her feel as though Sarah's replacing her. 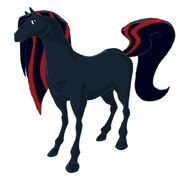 Sarah and Scarlet (audry22)
Add a photo to this gallery
Retrieved from "https://horseland101.fandom.com/wiki/Scarlet?oldid=9599"
Community content is available under CC-BY-SA unless otherwise noted.